We Have a Tendency to Use People and Love Things

‘Reality TV today is very reminiscent of the Roman Colosseum; watching people fight to the death as entertainment…’

MANILA, THE PHILIPPINES — The OneBillionStories.com Philippines team has been working hard to bring inspiring stories from their great Catholic nation across the Pacific to American screens and far beyond, depending on where you are reading this in the world. Led by David Panlilio, and aided by the editing expertise of Carl, James, and Christopher, our international OBS team brings part 2 from Leah Darrow’s wise, inspiring, and conviction-filled words from Manila (click here for part 1). In part 2, Leah focuses on media, specifically the role of RealityTV in America, and it’s connection back to the Roman Colosseum, watch to see how she does it.

Video Missionary in the Philippines

The question arises at the beginning of this part 2 from Leah, centered upon making right choices in life. Unfortunately, America in the 21st century is not making the right choice when it comes to media content and it’s outlets. Our team especially took notice when Leah said, “we have a tendency to use people, and love things.” Such a powerful statement from a young woman who has been immersed in American media prior to discovering authentic love explained in part 1.
CONNECT

It is obvious after hearing this former ‘America’s Next Top Model’ reflect on American media, that the morality level is at an all time low in this once great nation. It appears from many (not all) TV shows that the dignity of the human person has been sent to the Hollywood archives, gathering dust for another generation. Any mention of faith, Christ’s love, or authentic love, is basically extinct in pop-media, and contemporary journalism. Despite these challenges in media, the culture, and the propagation of ‘American ideals’ on to other cultures, change and making right choices is always possible says Leah: ‘Truth has a name. Truth has a face, and it is Jesus Christ.’ Hope for the future rests solely in Jesus Christ. It is this hope that drives Leah Darrow to most corners of the earth, sharing her story of reversion to true happiness, found only in the 2,000 year old Catholic faith.

In closing, our team in the Philippines asks Leah to reflect upon their nation of islands, a very strong Catholic country that is probably ‘the light on the hill’ for all nations, holding on to a 90% plus Catholic population. Gazing into the eyes of the Filipinos brings pure hope and Joy to Leah Darrow. Where will the world find happiness moving forward in 2013? Will it be in shows like ‘America’s Next Top Model,’ or cultures like the Filipino culture, Catholic culture? That is the task for all reading and hearing these words to discover.

“Do not take the lead from America, fight for your culture, we support you (the Philippines).” - Leah Darrow

Learn more about Leah Darrow by clicking on the logo above.

ROSARY: JOYFUL MYSTERIES
1. The Annunciation
2. The Visitation
3. Birth of Our Lord
4. Presentation
5. Finding in the Temple 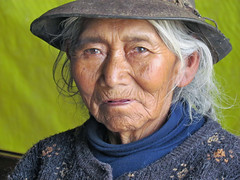 DEATH ROAD SURVIVORS!!!!!!!!!!!!!! When we first got to La Paz, Bolivia we had almost totally forgotten about a long time dream excursion of...

Lake Titicaca, the Bolivian Side with Annie and Al: Vlog # 43

For the first time ever we got the view of Lake Titicaca from the Bolivian side from Copacabana, Bolivia. We crossed the border and...

We were going to leave Ayaviri and move on to Bolivia, but they convinced us to stay an extra week to work as translators...

They day after arriving in Ayaviri, Peru, the local bishop of the prelature, Msgr. Kay Martin, invited us to the house where he and...