The Holy Father Has Arrived!

Once you watch this video from World Youth Day, you will understand many levels of Catholic tradition, passion, and history. One of those levels being the intensity of the Rock. A house built on sand will crumble, but a house built on rock will stand strong, 2,000 years strong! So along the throng of pilgrims’ excitement for Pope Francis, it is the Rock, Saint Peter, that brings us ‘one billion Catholics’ together for Him. 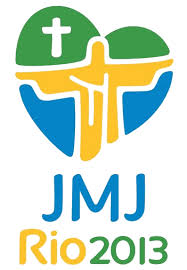 The tradition of historical truth is simply that, truth, recorded in the books, stones, paintings, and many other forms of communication from the Early Church. So as the millions of young Catholics chant for Francis, the first Pope to take that name, it is the Keys that he carries which protect and honor Christ’s message. For it is Christ’s charity that will bring about eternal hope to the longing people of Brazil, and yes they long, look into their eyes on the metro (subway).

And who better at this moment in world history to lead all the young people in a true Christian life than Pope Francis? The Christian life is simple, proven by our Pope, but most often times difficult. Who really wants to wash the feet of the poor, shave the homeless, or tend to the dying? In this century, that passion for Christ’s message continues to fade in to the books of history.

Then along comes World Youth Day, counter cultural from every angle. Blazing a trail of purpose in today’s misdirected world. And on top of World Youth Day, we are led by the first South American Pope, in fact, the first non-European Pope for many centuries. With the prayers of Benedict surely flying from Rome, the reality of Pope Francis’ day to day living, and a beautiful setting in Rio, we at OBS say this gathering of Catholic pilgrims could ignite a new drive to Truth & Love in this part of the world. And so we kneel, we hug, we look to the heavens for guidance in these World Youth Days.

ROSARY: SORROWFUL MYSTERIES
1. Agony in the Garden
2. Scourging at the Pillar
3. Crowning of Thorns
4. Way of the Cross
5. Crucifixion and Death